A fish vendor sells “tamban” (sardinella) at Paco market in Manila, September 22. Fisheries production fell in the third quarter of 2022, according to the statistics agency. — PHILIPPINE STAR/EDD GUMBAN

AGRICULTURAL PRODUCTION rose in the third quarter as growth in the crops, livestock and poultry sectors offset a decline in fisheries production, the Philippines Statistics Administration (PSA) said on Wednesday.

Data released by the PSA showed that the value of production in agriculture and fisheries increased by 1.8% in constant prices from 2018 in the period July to September. This was a reversal of the 0.6% decline in the second quarter and the 2.6% decline in the same quarter in 2021.

“At current prices, the value of production in agriculture and fisheries was 501.58 billion pesetas, up 12.3% on the previous year,” the PSA said. 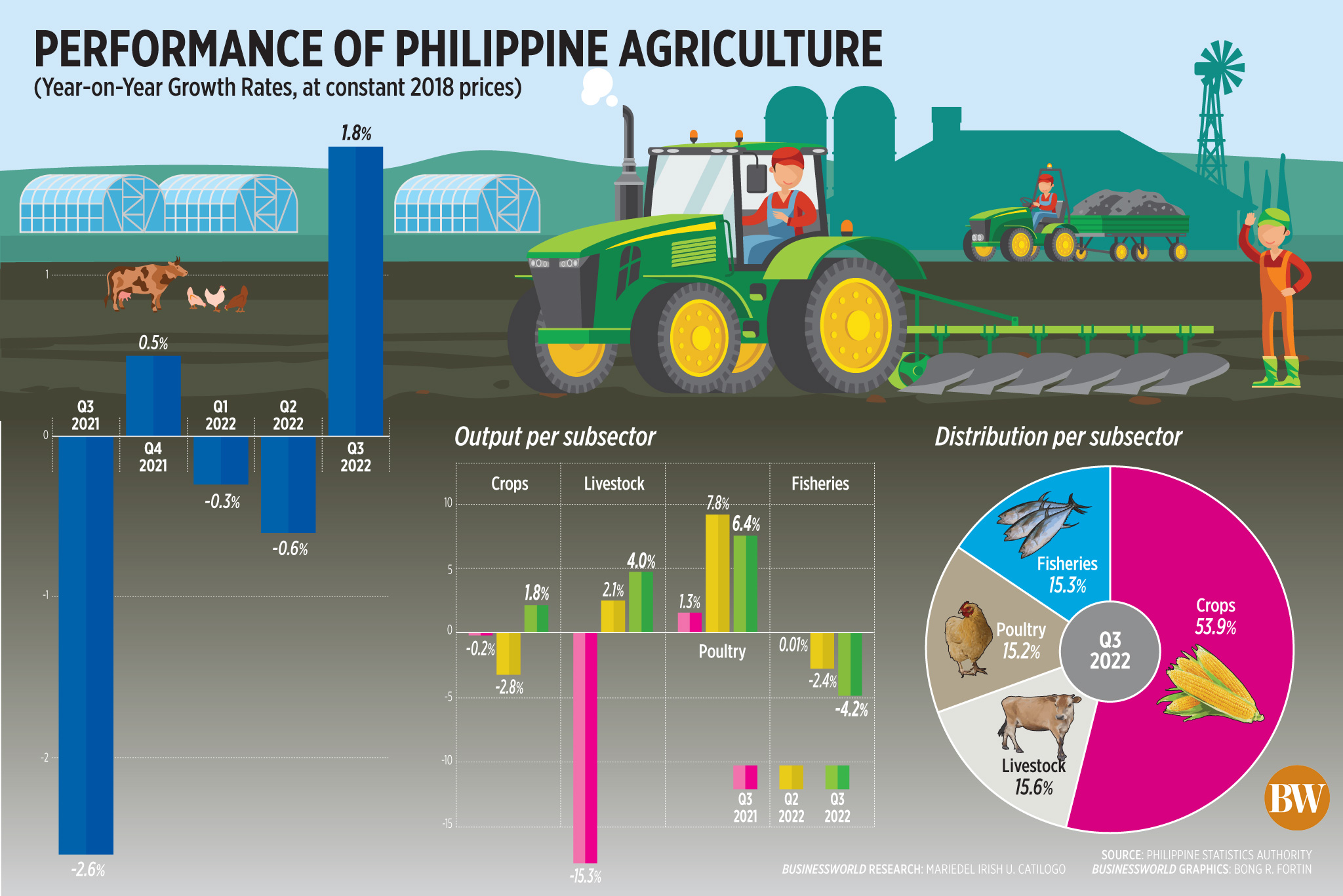 For the nine-month period, the value of agricultural production rose 0.3%, reversing a 2.5% decline a year ago.

The agricultural sector contributes around a tenth of total GDP. Economic data for the third quarter is due to be released today (Nov 10).

Grains, which contributed 53.9% to the total value of agricultural output, rose 1.8% annually in the third quarter. This was an improvement from the 2.8% decline in the second quarter and the 0.2% decline in the same quarter of 2021.

However, crop production contracted 1% in the January-September period, a reversal of growth from 2.1% a year ago.

Pablo Luis S. Azcona, who represents the sugar growers’ bloc in the Sugar Regulatory Administration (SRA), said the higher sugar production was due to the early start of the milling season.

“We started almost two weeks early. At the moment the production is higher compared to last year for the same period,” said Mr. Azcona in a telephone conversation.

In August, the government pushed for sugar factories to reopen ahead of the milling schedule to ease supply shortages that were pushing up prices.

LIVESTOCK, POULTRY
Meanwhile, livestock, which accounted for 15.6% of total production, rose 4% in the July-September period, versus -15.3% in the same quarter of 2021.

Fermin D. Adriano, former Secretary of State for Agriculture for Policy, Planning and Research, said in a Viber message that livestock production had improved as the pig industry continued to recover from the African swine fever (ASF) outbreak.

PSA data also showed that poultry production, which accounted for 15.2% of total farm output, rose 6.4% in the third quarter. This is an improvement on the 1.3% growth seen in July-September in 2021.

The value of poultry production increased by 8.8% in the January-September period, compared to -1.3% in the same period in 2021.

At current prices, the value of livestock production was P94.49 billion, up 18.7% year-on-year.

Roehlano M. Briones, a senior research fellow at the Philippine Institute for Development Studies, said growth in chicken production has been fueled by higher demand.

FISHERIES BREAK
Fisheries, which accounts for 15.3% of total agricultural production, was the only sector to show a decline in the third quarter.

The value of fisheries production fell 4.2%, worsening from a 2.4% decline in the second quarter and 0.01% growth in the same period a year ago.

Nine-month fishery production also contracted by 4%, down from -0.3% in the same period a year ago.

At current prices, the value of fisheries production was P77.97 billion, an increase of 10.3% over the previous year.

“The fisheries have declined due to a series of typhoons such as Typhoon Karding. The fishermen couldn’t fish,” said Mr. Adriano.

Agricultural damage from Typhoon Karding, which made landfall in September, totaled 3.12 billion pesos, according to the Agriculture Ministry. The volume of lost production was estimated at 158,117 tonnes (MT), affecting 170,762 hectares of farmland and 108,594 farmers and fishermen.

Meanwhile, damage from severe Tropical Storm Florita, which made landfall in August, reached 1.13 billion pesos, affecting 6,647 farmers, with lost output of 66,633 tons on 44,922 hectares of farmland.

Analysts warned that annual growth in the third quarter could be misleading and may not signal sustained expansion in the final quarter.

“Poultry and livestock are recovering from last year’s negative growth rates. We expected worse performance mainly due to the impact of fertilizer and fuel prices,” he said in a Viber message

Mr Briones noted that growth in agriculture tends to be “erratic”.

“I see no reason for sustained growth, especially given the threats of climate, disease and high input costs,” he added.

Mr Adriano said production could increase ahead of the holiday season due to greater demand.

“It depends (also) on whether pigs continue to recover from ASF and poultry from bird flu. The harvest could decline due to high fertilizer costs and typhoon damage,” he added.