The Philippine central bank is widely expected to hike interest rates by 50 basis points (bps) at Thursday’s meeting, as the US Federal Reserve is also likely to tighten monetary policy this week.

A survey conducted by BusinessWorld last week showed that 14 out of 15 analysts expect the Monetary Board (MB) to raise borrowing costs further at its December 15 meeting.

For 13 analysts, the central bank could deliver a 50 basis point rate hike, while one economist expects a 25 basis point hike. 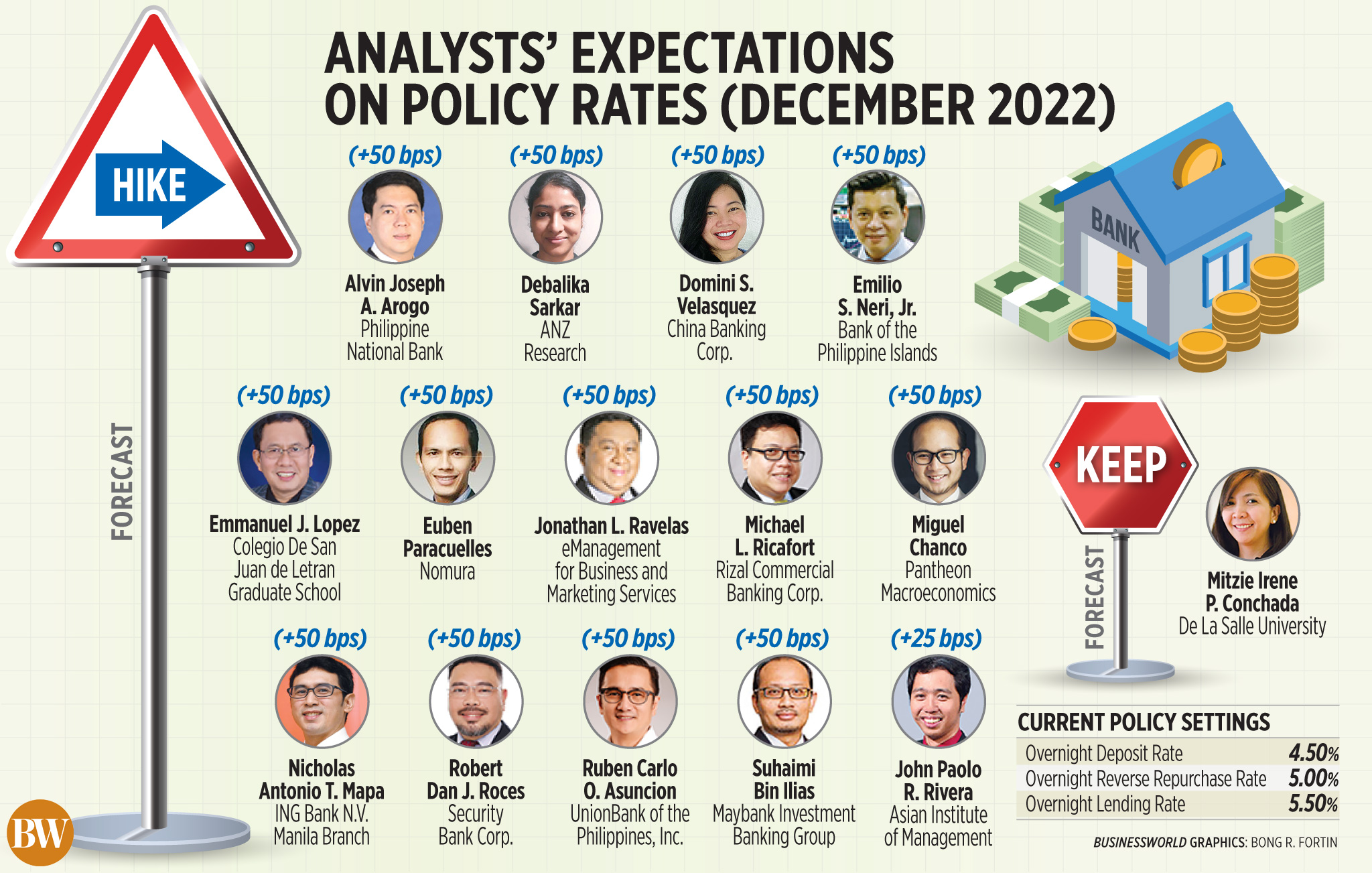 On the other hand, one analyst expects the Bangko Sentral ng Pilipinas (BSP) to keep rates unchanged.

“The outcome of the overnight US FOMC (Federal Open Market Committee) meeting, the development of the dollar-peso exchange rate and the inflation numbers in November will be important considerations for the BSP decision,” said ANZ Research economist Debalika Sarkar.

“We believe the central bank will maintain a comfortable interest rate differential with the US to support the peso and limit the pass-through to domestic inflation, which is already well above tolerance,” she added.

The BSP has hiked interest rates by 300 basis points since May to keep rising prices in check, with the key interest rate now standing at 5%.

Meanwhile, the US Federal Reserve has hiked borrowing costs by 375 basis points to a range of 3.75% to 4% since March. It is widely expected to deliver a smaller rate hike of just 50 basis points on Dec. 13-14 after four consecutive hikes of 75 basis points.

“Definitely the magnitude of the Fed rate hike announced just a day ahead of the BSP Monetary Board meeting [will be a key consideration for the BSP]; Our base case is that the Fed will also move on to lower rates,” said Miguel Chanco, Pantheon Macroeconomics’ chief emerging Asia economist.

“Current inflationary pressures suggest that the GNP will opt for a 50 basis point hike at its next policy meeting on December 15, after the US Federal Reserve had expected a similarly large hike, and to bring inflation back to levels on target-consistent path for 2023,” said Robert Dan J. Roces, chief economist at Security Bank Corp.

Mr Roces said it was important to see whether inflation was being driven by “temporary” factors such as holiday-related demand or weather-related supply disruptions.

“The increase in the prices of goods and services in the period leading up to and including Christmas can have an impact on inflation as it causes retailers to raise prices to take advantage of increased demand for their products,” he said.

With food prices already high due to agricultural losses from recent typhoons, inflation risks are on the upside, he added.

“Inflation rates will remain at accelerated levels through the end of the year due to increased demand caused by the start of the holiday season,” said Emmanuel J. Lopez, associate professor at the Colegio de San Juan de Letran Graduate School.

“One thing that is positive for the local economy is the continued appreciation of the local currency against the US dollar. Although this is not caused by a stronger local economy but by the weak US economy and the lockdown in China, the appreciation of the peso has brought relief to the once depreciating/declining local currency,” added Mr. Lopez.

After hitting a new record low of P59 per dollar this year, the peso rallied and returned to P55 levels this month.

On Friday, the local unit closed at 55.37p against the dollar, up 8 centavos from Wednesday’s close of 55.45p.

BSP MAY STILL RISE PRICES IN 2023
The central bank is also likely to extend its tightening cycle into next year as inflation is expected to exceed its 2-4% target, analysts said.

“This means that apart from the December hike, BSP will continue its monetary tightening cycle until early next year. Our forecast for 2023 with average inflation of 4.6% is higher than that of GNP,” she said.

Core inflation, which factors in volatile food and fuel prices, rose 6.5% in November from 5.9% in October. In the eleven months to November, core inflation averaged 3.7%.

Ms Velasquez added that GNP benchmark interest rate could reach 6% next year and any policy easing, if any, will not materialize until the fourth quarter as inflation is expected to be back within target range by then.

“Both GNP and the national government need to keep a close eye on the trajectory of core inflation, which could bleed into the first half of 2023 and prove more difficult to tame if left unchecked,” said Mr Roces of the security bank.

“Should prices rise above normal market volatility and also penetrate the core, BSP may need to take further, stronger measures to prevent a larger inflation problem from developing, while the government needs to increase subsidies and price caps to complement this monetary one side,” he added.

“While we hope for faster disinflation soon and thus a premature end to the GNP rate-hike cycle, the added challenge of a positive backdrop for domestic demand will also require a higher terminal interest rate to reprioritize household savings and thus ease demand . Ancillary to inflationary pressures,” he said.

“If the Fed does its pivot, the BSP will be able to do its own pivot with a pause in the second quarter of 2023 and rate cuts in the second half of next year,” he said.

However, for Pantheon Macroeconomics’ Mr. Chanco, December’s 50 basis point rate hike could be the last hike in GNP in this tightening cycle.

“Not much more is needed to guarantee that inflation will fall back into target range no later than the third quarter of next year thanks to the moderation in global food and oil inflation,” he said.