According to analysts, HEADLINE INFLATION likely peaked in December as strong holiday demand and typhoon-inflicted agricultural damage may have pushed food prices higher.

A BusinessWorld poll of 11 analysts gave a median estimate of 8.3% for inflation in December. This is also within the 7.8% to 8.6% forecast given by Bangko Sentral ng Pilipinas (BSP) last week.

Should this materialize, December would be the ninth straight month of inflation exceeding the 2-4% GNP target range. 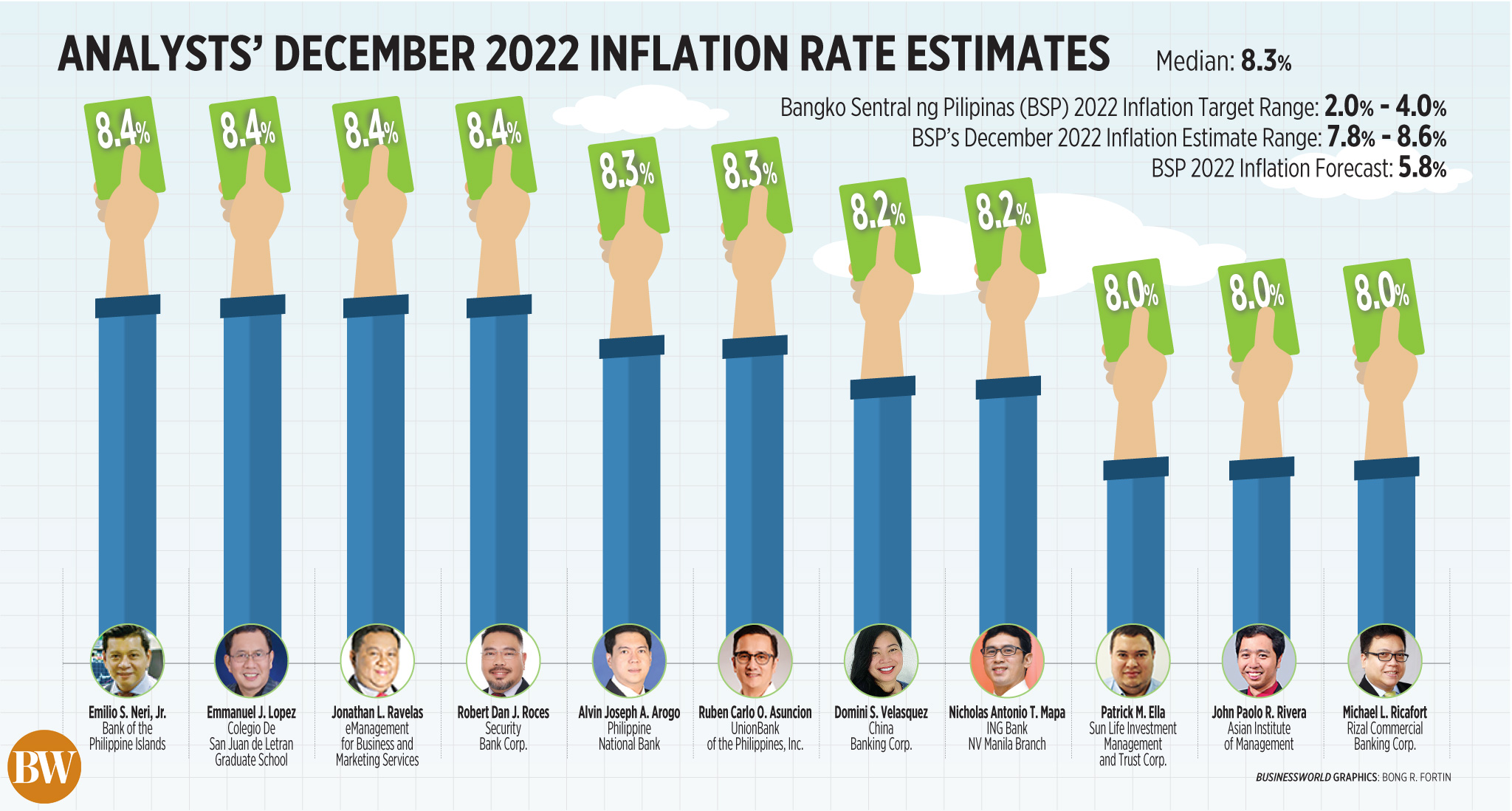 This would also bring full-year inflation to 5.8%, in line with the median GNP forecast for 2022.

December inflation would also be the fastest pace since hitting 9.1% in November 2008 at the height of the global financial crisis.

“This has been exacerbated by the traditional Christmas shopping spree, which has increased consumer spending, leading to a rise in the prices of basic consumer goods that are typically consumed during the holiday season,” he said.

The prices of most foods, which Filipinos consider staples of Christmas, rose as much as 10% in November, according to the Department of Commerce.

“We believe the impact of Typhoon Paeng will continue as the four regions placed under a ‘state of disaster’ by April 2023 contribute 27% of the country’s land, forest and fishery output,” said Mr. Arogo.

Harvest damage and higher demand may have boosted prices for vegetables like onions in December. The price of red onions rose as high as P700 per kilo in December, prompting the Department of Agriculture to introduce a suggested retail price of P250 per kilo of red onions.

“This is reflected in the expected increase in core prices, which is expected to remain above 6% in the first half of 2023,” Ms. Velasquez said.

Core inflation, which factors in volatile food and fuel prices, rose 6.5% in November from 5.9% in October. This is also higher than the 3% reading in December 2021. Over the 11 months to November, core inflation averaged 3.7%.

She said a fall in pump prices in December was likely offset by increases in electricity tariffs and the price of liquefied petroleum gas (LPG).

Energy Department data showed that petrol, diesel and kerosene prices fell by about 2.6 and 3.9 pesetas per liter respectively during the month.

However, last month Manila Electric Co. (Meralco) increased the total tariff for a typical household by P0.3297 to P10.2769 per kilowatt hour.

The price of LPG products also increased by P2.25 per kilogram and AutoLPG by P1.26 per liter in December, marking the second consecutive month of price increases.

“We also do not expect an immediate abating of the second-round effects from global commodity price increases and peso depreciation in 2022,” Mr. Arogo said.

She added that upside risks to her forecasts include a likely wage hike and an earlier-than-expected reopening in China, which could push oil prices higher.

“Inflation is expected to ease in (first quarter of 2023) due to the slowdown in consumption after the holiday,” said Robert Dan J. Roces, Security Bank Corp’s chief economist.

He added that the central bank will continue its tightening cycle to fight inflation, raising 50 basis points (bps) in the first quarter before taking a long pause this year.

The BSP adjusted interest rates by 350 basis points in 2022 to bring down inflation. This comes after a total of 200 basis points of rate cuts in 2020 to support the pandemic-hit economy.

“Due to the high base effect and our assumption that there will be no new supply shocks in 2023, we estimate that inflation will slow from January 2023 onwards. fourth quarter of 2023),” said Mr. Arogo.

Mr. Lopez said the inflation rate will gradually ease in the first quarter as consumer spending and the supply chain normalize.

“This will prevail in 2023 when the inflation rate will reach its target level of around 2-4% as predicted by GNP,” he added.

GNP Governor Felipe M. Medalla earlier signaled further tightening as the central bank plans to bring inflation down to 3% in the third quarter of next year and back to 2-4% by 2024.

The Monetary Board will conduct its first policy review of the year on February 16th.