The unemployment rate fell to a new low since the coronavirus pandemic began in September, but job quality has continued to deteriorate, the Philippines’ Statistics Agency (PSA) said on Tuesday.

Preliminary data from the PSA Labor Force Survey (LFS) showed that the unemployment rate fell to 5% in September from 5.3% in August and 8.9% a year earlier. 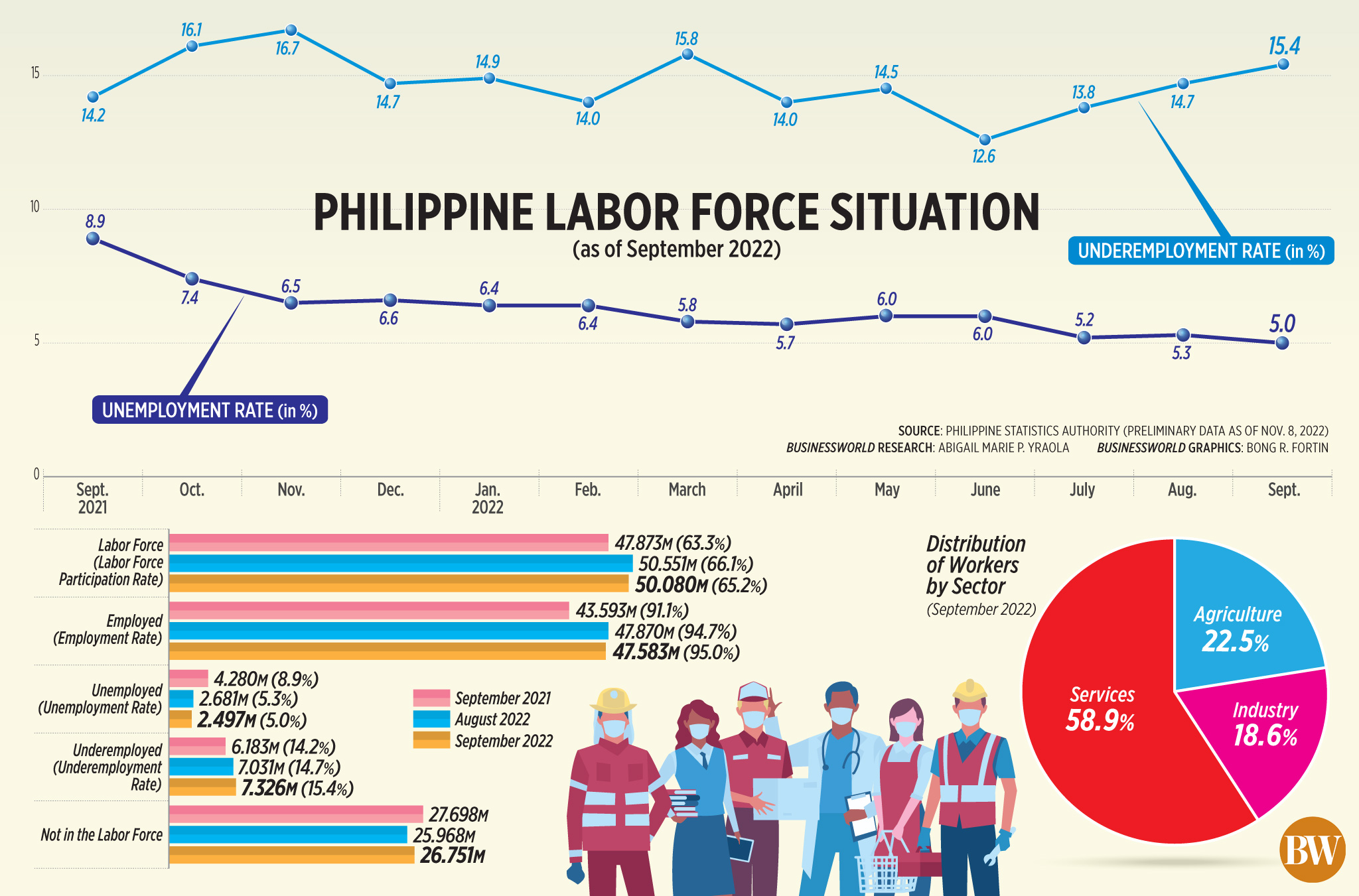 The month saw the lowest number of jobless Filipinos since October 2019, when 2.05 million were unemployed.

“The latest survey results show the gains of fully reopening our economy,” Minister for Socio-Economic Planning Arsenio M. Balisacan said in a statement.

Metro Manila and most provinces have been on the mildest alert level since March, allowing businesses to operate at full capacity.

September was also the third consecutive month that underemployment has increased.

In absolute terms, the number of underemployed Filipinos rose to 7.33 million in September from 7.031 million in August, “as more than 882,000 individuals sought to earn extra income from inflation-induced increases in commodity prices,” according to the National Economic and Development Authority (NEDA) said.

The labor force participation rate (LFPR) – the proportion of the Filipino labor force in the total working-age population aged 15 and over – fell to 65.2% in September, from 66.1% in August. The LFPR in September was still higher than the 63.3% a year ago.

The total number of people in work fell to 50.08 million in September from 50.551 million in August.

PSA Undersecretary of State and national statistician Claire Dennis S. Mapa said the September school reopening has prompted some to exit the workforce and return to the classroom.

Elevated inflation could hurt job creation in the coming months.

“Of course, the rising inflation rate will bring challenges as it will affect demand for jobs,” Mr Mapa said.

Headline inflation accelerated to 7.7% in October from 6.9% in September, the fastest rise in almost 14 years.

Meanwhile, the employment rate was 95% in September, up from 94.7% in August and 91.1% in the same month a year ago. NEDA said this was the highest recorded employment rate since January 2022, mainly due to the “significant de-escalation of quarantine restrictions in the community”.

This equates to 47.58 million Filipinos in employment, down slightly from 47.87 million in the previous month but up from September 2021’s 43.59 million.

By sector, services remained the main employer, accounting for 58.9% of the total labor force, followed by agriculture (22.5%) and industry (18.6%).

The manufacturing sector recorded the highest monthly job growth with 780,000 to 4.45 million jobs in September.

Ms Velasquez said job losses were particularly evident in food and drink retail outlets, such as supermarkets and sari-sari shops, “as rising input costs are likely to squeeze profits”.

“During the holiday season, some companies are having seasonal job gains. They’re also posting their highest earnings of the year,” he said in a Viber message.

“Underemployment is likely to remain high as high inflation causes low-income workers to look for extra income to offset the higher cost of living,” she said.