Gross domestic product (GDP) grew 6.1% year-on-year in July-September, according to the median forecast of 16 analysts in a BusinessWorld survey last week. 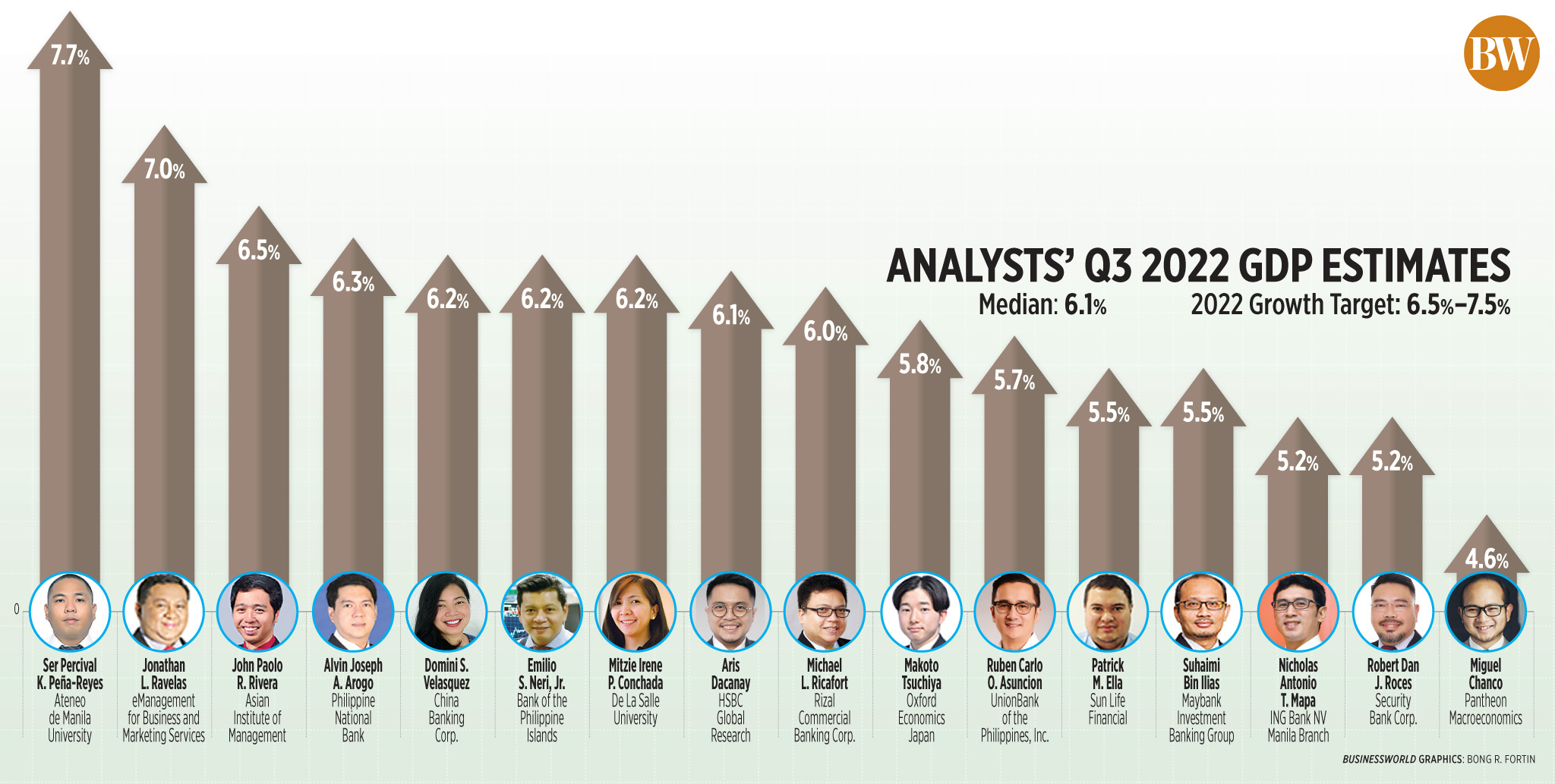 That would bring nine-month average GDP growth to 7.2%, still within the Development Budget Coordination Committee’s (DBCC) target of 6.5% to 7.5% for the full year.

The third quarter GDP data is scheduled to be released by the Philippine Statistics Agency (PSA) on November 10th.

According to analysts, economic growth may have been hampered by accelerating inflation, the peso’s depreciation against the US dollar and rising interest rates.

Security Bank Corp. chief economist Robert Dan J. Roces, who forecast third-quarter GDP of 5.2%, said the slower growth was “mainly due to headwinds created by inflation and the weakness of the peso is caused”.

“These dampened potential growth in private consumption, which accounts for around 72% of GDP. Nonetheless, the government has not imposed any new mobility restrictions, allowing economic activity to continue despite the challenges, underscoring a still ongoing economic recovery and likely still decent growth figures,” Mr Roces said in an email.

Inflation accelerated to 6.9% in September, taking the third quarter average to 6.5% – well above the Bangko Sentral ng Pilipinas (GDP) target range of 2-4%.

For the January-September period, headline inflation was 5.1%, below full-year GNP forecast of 5.6%.

The BSP raised its overnight funds rate by 50 basis points (bps) at its September meeting. Since May, the central bank has raised interest rates by 225 basis points to tame inflation.

“On a positive note, tourist arrivals improved in the third quarter, contributing to the consumption of services such as air travel, accommodation and the like. We’ve also seen big items like auto sales continue to defy a high-yield environment,” Ms Velasquez said in an email, adding that real estate won’t be “shockproof.”

Rising prices may also have prompted consumers to cut back on spending on non-essential goods and services, she added.

Bank of the Philippines chief economist Emilio S. Neri, Jr. said elevated inflation may have contributed to a “noticeable slowdown” in household consumption, despite the resumption of face-to-face classes. He also noted that slower remittances may have dragged down overall consumer spending.

But Miguel Chanco, the Pantheon’s chief emerging Asia economist, which expects Q3 GDP growth of 4.6%, said this sharp slowdown was partly due to the “unfavorable base effect as the third quarter was quite strong last year was”.

“Basically, however, the report will show more clearly the weakness in household spending, which, if you can remember, fell sharply quarter-on-quarter in the second quarter on a seasonally adjusted basis,” Mr Chanco said in an email.

Meanwhile, analysts are expecting a further slowdown in the fourth quarter, bringing their full-year GDP estimates to between 5% and 7.6%.

Maybank Investment Bank chief economist Suhaimi Bin Ilias said GDP growth is expected to slow to 5% in the fourth quarter. He expects full-year GDP growth to settle at 6.5%, the lower end of the government’s target.

“Nevertheless, the easing of mobility restrictions and the resumption of face-to-face classes in August 2022 (in stages and fully implemented by November 2022) are expected to lead to a further pickup in domestic demand and could drive higher-than-expected fourth-quarter growth,” said Mr. Ilias in an email.

Pantheon’s Chanco said he was maintaining his 2.8% year-on-year guidance for the fourth quarter for now, “implying growth of just 5.6% for the full year.”

Economist Mitzie Irene P. Conchada of De La Salle University said growth could settle between 5% and 6% in 2022 “despite a strong start earlier in the year.”

“Looking forward, we expect growth to decelerate further in the coming quarters and for next year’s GDP growth to fall short of the government’s target. A global slowdown, aggressive monetary tightening and reduced government spending will dampen GDP growth in 2023,” said China Bank’s Ms Velasquez.