THE PHILIPPINE ECONOMY expanded faster-than-expected in the third quarter, putting it on track to beat the government’s full-year target, but faces headwinds from rising inflation and rising interest rates.

Preliminary data from the Philippines Statistics Agency (PSA) showed that gross domestic product (GDP) grew 7.6% from July to September, slightly faster than revised growth of 7.5% in the second quarter and 7% a year earlier.

The latest growth was higher than the median of 6.1% forecast in a BusinessWorld survey last week. 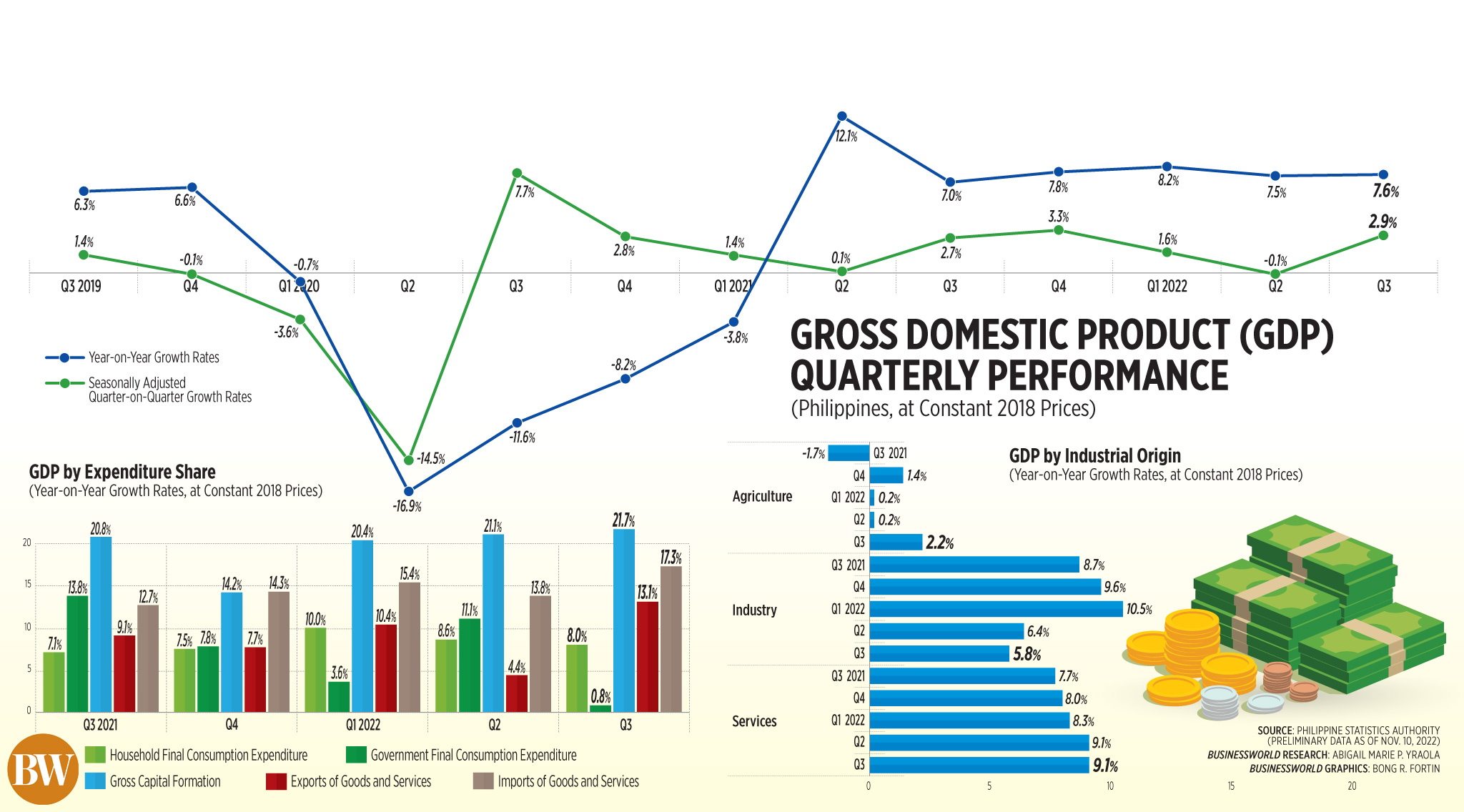 In the first nine months of the year, GDP growth averaged 7.7%.

Arsenio M. Balisacan, Minister for Socio-Economic Planning, was surprised by the high growth.

“Despite the increase in consumer prices in recent months and also the interest rate hikes, the economic performance in the third quarter could have been better if these developments had not happened,” he said in a press conference. “Nevertheless, the 7.7% [nine-month] The performance is very respectable.”

The Philippines’ GDP growth of 7.6% was the second-highest in Southeast Asia in the third quarter, behind Vietnam’s 13.7%.

According to Balisacan, the economy only needs to grow by 3.3-6.9% in the fourth quarter to meet the government’s target of 6.5-7.5% for the full year.

“It seems that reaching our target this year is not a problem, we only need 3.3% growth to reach the lower end of the range. The fourth quarter is usually the fastest growth rate in a year, so I’m not expecting that. We may even grow higher than what is targeted for the full year,” Mr. Balisacan said.

On a seasonally adjusted quarterly basis, GDP grew 2.9% versus a 0.1% contraction in the second quarter, reflecting the economy’s “solid stance on current domestic and external risks,” according to Balisacan.

HIGH INFLATION
“While these developments are noteworthy, I would like to emphasize that our nation still faces a significant burden in the form of high inflation due to heightened external risks and the brunt of recent typhoons,” he said.

Inflation averaged 5.1% for the nine-month period.

To tame inflation, the BSP has hiked interest rates by 225 basis points (bps) this year.

During the quarter, the country was also hit by a series of storms, including Typhoon Karding, which caused P3.12 billion in damage to agriculture.

“Without these consumer price increases, one would have expected higher economic output. Remember, high inflation is a big problem globally… Our bigger challenge is to quickly address the adverse impact of natural disasters like the recent typhoons within a few months,” said Mr. Balisacan.

STRONG CONSUMPTION
On the demand side, private consumption and investments were the main growth drivers in the third quarter. So-called revenge spending may have contributed to strong household consumption as Filipinos moved more freely.

Mr Balisacan said the rapid growth was due to spending on restaurants, travel and tourism.

“This turnout shows that Filipino families are on the verge of returning to pre-pandemic life as more people visit restaurants and hotels and engage in recreational activities in the country,” he said.

Household consumption rose 8% year-on-year, slower than 8.6% in the second quarter but faster than 7.1% a year earlier.

In a quarterly comparison, consumption by private households increased by 5.7%.

“This economic performance largely benefited from further easing of mobility, including the resumption of face-to-face classes, which boosted consumption among Filipinos,” Mr. Balisacan said. “Easing of border restrictions and simplified travel protocols also supported growth in local tourism and other sectors hard hit by the pandemic, leading to economic expansion in the third quarter.”

Gross fixed capital formation, the investment component of the economy, jumped to 21.7% in the third quarter from 20.8% a year earlier. It was also slightly faster than the previous quarter’s 21.1%.

However, government spending growth slowed to 0.8% in July-September, compared with 13.8% a year ago and 11.1% in the previous quarter.

Mr Balisacan said slower government spending was “quite surprising” in an election year, adding that the government may have frontloaded spending in the first half.

PSA data also showed that exports of goods and services rose 13.1% in the third quarter, up from 9.1% a year earlier and 4.4% in the second quarter.

“Services imports had the largest expansion in the third quarter at 55.2%. This was followed by exports of services at 32.5%, construction at 11.8% and durable equipment at 11.6%,” said national statistician Claire Dennis S. Mapa.

On the manufacturing side, all sectors recorded annual growth – services at 9.1%, industry at 5.8% and agriculture at 2.2%.

Net primary income from the rest of the world was 94.6%, beating the 52.4% decline a year earlier and better than 65.3% in the second quarter.

Gross National Income – the sum of the country’s GDP and net income earned from overseas – rose 10.5% from 2.8% a year earlier and 9.3% in the previous quarter.

“With the holidays approaching, we can expect growth momentum to remain intact, with household spending likely to support broader economic activity for the first mobility-free holiday,” said Nicholas Antonio T. Mapa, senior economist at ING Bank NV Manila. “On robust growth, we expect GNP to remain hawkish with the central bank likely to hike interest rates to 5.5% by year-end.”

In a separate report, ANZ Research said the monetary tightening cycle “may need to be deeper than currently expected”.

The Monetary Board will hike interest rates by 75 basis points (bps) at its November 17 meeting to reflect the recent Federal Reserve tightening.

“The fiery print for the third quarter significantly exceeded even the most optimistic forecasts. Needless to say, we now have no choice but to upgrade our below-consensus full-year GDP growth forecast of 5.6% for 2022,” said Miguel Chanco, the Pantheon’s chief emerging Asia economist, in a statement.

On the other hand, Makoto Tsuchiya, associate economist at Oxford Economics, said the economy is likely to slow in the coming quarters.

“Inflation, which will peak in the fourth quarter, will continue to weigh on household spending. In addition, mounting external headwinds, including higher commodity prices, tighter global financial conditions, a recession in advanced economies and a slowdown in China, will reduce demand for Philippine commodity exports,” Mr. Tsuchiya said in a note.

In a report, Moody’s Analytics said the economy was on track to grow over 7% by year-end, but high inflation was likely to persist into early 2023.

“The remainder of 2022 and early 2023 will be bumpier as the country struggles with inflation, a weaker global economy and rising interest rates. Higher inflation and interest rates will depress household spending and business investment,” said Moody’s Analytics.