Men and women line up during a job fair at a covered courthouse in Tondo, Manila November 21. – PHILIPPINE STAR/EDD GUMBAN

THE UNEMPLOYMENT RATE fell to 4.5% in October, returning to the record low last seen in October 2019 before the outbreak of the coronavirus pandemic, the Philippine Statistics Authority (PSA) said.

Preliminary results from the PSA’s Labor Force Survey (LFS) showed that the unemployment rate was 4.5% in October, down from September’s 5% and 7.4% a year earlier.

“That takes us back to where we were in 2019. The last time we saw this was in October 2019 when we also had an unemployment rate of 4.5%,” said PSA Undersecretary and national statistician Claire Dennis S .Mapa during a press conference on Wednesday. 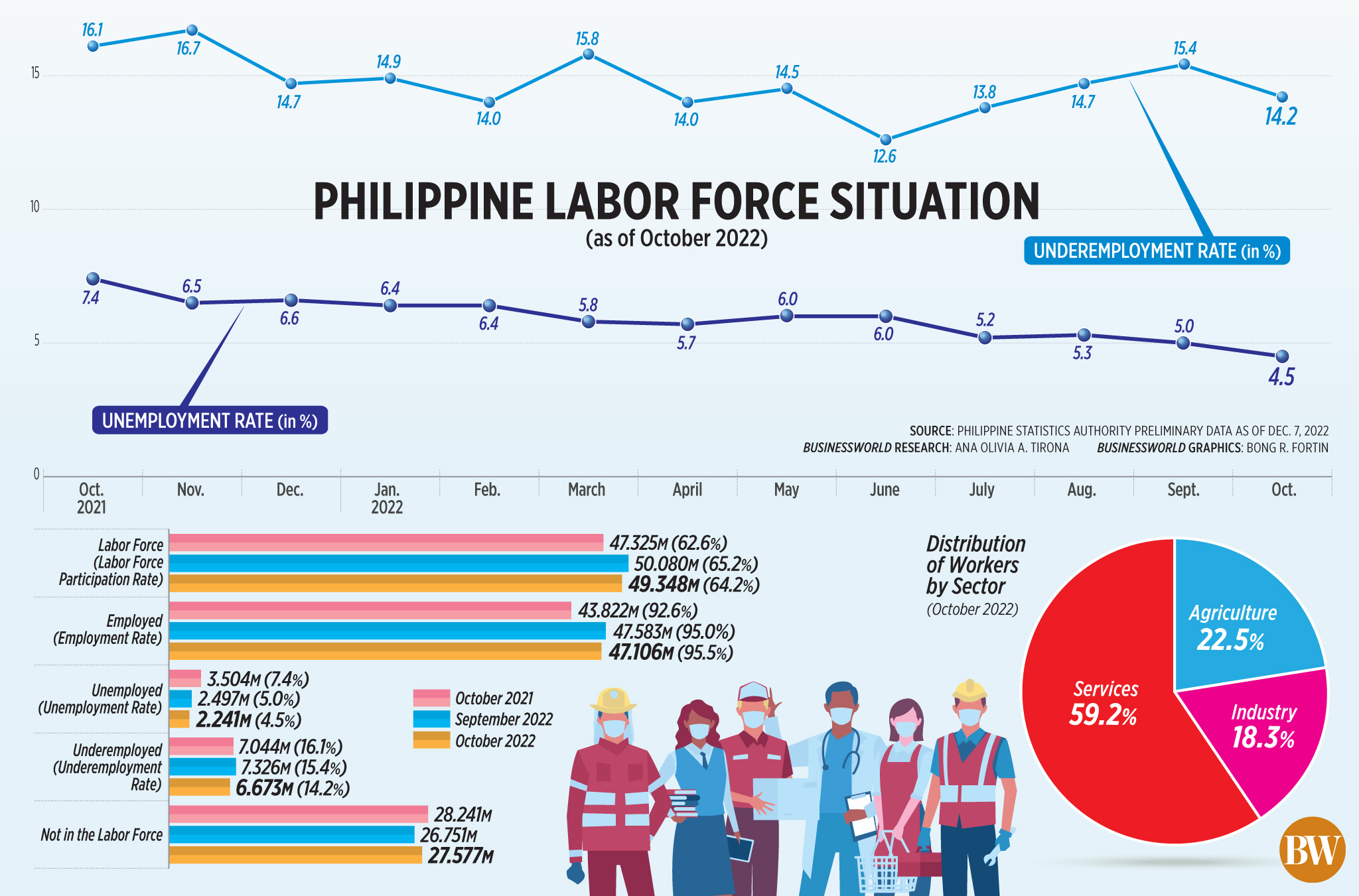 According to the PSA, that meant 2.241 million Filipinos were out of work in October, down from 2.497 million in September and 3.504 million in the same month last year. This was also the lowest number of unemployed Filipinos since October 2019.

“The continued recovery of the country’s labor market reaffirms our confidence that our policies and interventions to revitalize our economy are working,” Arsenio M. Balisacan, Minister for Socio-Economic Planning, said in a statement.

Meanwhile, job quality continued to improve in October as the underemployment rate fell to 14.2% from 15.4% in September and 16.1% a year ago.

The October underemployment rate, or the rate of employed Filipinos looking for more jobs, was the lowest since the 13.8% reported in July.

In the period January to October, the underemployment rate averaged 14.4%, compared to 16% a year earlier.

In absolute terms, the number of underemployed Filipinos fell to 6.673 million in October, from 7.326 million in September and 7.044 million in the same month in 2021.

This resulted in a labor force participation rate (LFPR) – or the proportion of the labor force in the total population aged 15 and over – of 64.2%. The October rate is lower than September’s 65.2% but higher than the 62.6% a year ago.

Mr Mapa said the drop in LFPR may have been due to seasonality, as young people aged between 15 and 24 may have returned to school during this time.

MORE HOURS
On average, a employed Filipino worked 40.2 hours a week in October, up from 39.6 hours in September and 39.7 hours in October last year.

“With the 40 hours… this is a factor due to the holiday season. So we have a lot of extended opening hours in the malls and even in the shops,” Mr Mapa said.

The service sector remained the top employer during the month, accounting for 59.2% of the total. Agriculture and industry follow with 22.5% and 18.3% respectively.

“However, if we look at the actual number of people employed, we can see that this number has actually decreased (from 47.58 million to 47.11 million), with the participation rate falling. This suggests that while there were gains, part of the drop in the unemployment rate is due to fewer workers looking for work,” he said in an email.

Sentro ng mga Nagkakaisa at Progresibong Manggagawa Secretary-General Joshua T. Mata said payrolls typically pick up in the fourth quarter when economic activity picks up ahead of the holiday.

“But despite some possible improvements in job quality, as measured by underemployment, labor slack still stands at almost 20% of the labor force. That means nearly one in five Filipino workers is unproductive due to unemployment and underemployment. This is the usual level of structural unemployment we had before the pandemic,” Mr Mata said in a text message.

However, he noted that job growth could slow in 2023 amid global headwinds.

“Once the surge in demand in Q4 is over early next year, we could see slower job growth. It’s really hard to stay optimistic, especially when we can’t see concrete measures being taken by the government to guarantee jobs,” Mr Mata said.

Asian Institute of Management economist John Paolo R. Rivera is optimistic that more jobs will be created in the coming months.